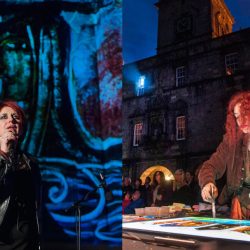 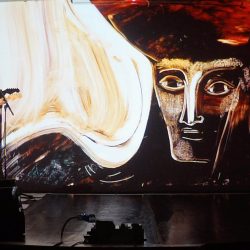 “Lascivious and monumental… a multi-media spectacular…” **** The Herald

SHAMANIC is an international art and music collective featuring acclaimed Russian artist Maria Rud, iconic punk rock legend, Fay Fife of the Rezillos and Martin Metcalfe, the front man of Goodbye Mr Mackenzie, Angelfish and The Filthy Tongues, with Kid Congo Powers, formerly of The Cramps and The Bad Seeds – a Scottish/US supergoup.

SHAMANIC is the fruit of the creative friendship between Fay Fife and Maria Rud, taking the AniMotion Show concept (developed by Maria with percussionist Evelyn Glennie (which toured to USA, China and Europe)) into the realm of rock ‘n’ roll, in which one member of the band is a painter.

The group delivers an unforgettable live experience in which music and painting become one in a psychedelic cinematic performance. Projected live, Maria’s iconic ever-changing imagery and perspectives, fused with the music, is akin to being in a live animated film, a transformative, immersive experience which cuts to the heart of the creative process.

The music created for SHAMANIC is a soundclash of 60s influenced garage, alternative rock and contemporary electronica, laced with a punk spirit, perfectly complementing Maria’s swathes of colourful, swirling paint.

SHAMANIC can be performed in a variety of spaces including large scale outdoor events, in churches, cinemas and indoor “black box” spaces. It works best in venues of character, dramatic and quirky, with a blackout.

SHAMANIC debuted at Edinburgh’s Old Quad (Sep 2018), with featured guests including actor Rula Lenska (Coronation Street, Rock Follies). Since then it has been performed in a variety of indoor and outdoor spaces (including Edinburgh Art Fair, Cottier Glasgow and Traverse, Edinburgh).

In 2020 the show was invited to make its US debut at SXSW, in Austin Texas, and then showcase as part of the prestigious Made In Scotland programme at Edinburgh International Fringe. Sadly, both became victims of COVID-19, but will hopefully be rescheduled for 2021.

a Hammer horror house-band let out from some Haight-Ashbury crypt for the night to whip up an unholy musical storm. Fife plays trippy organ and theremin, snarling her dervish-like way across the Old Quad steps, her voice erupting with hitherto undiscovered Grace Slick style dimensions… The Herald