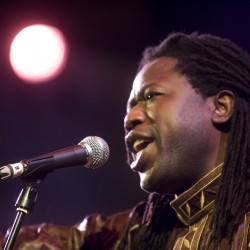 Musician Samba Sene was born in Dakar, Senegal and is now based in Scotland. His style is strongly influenced by a wide range of music, from traditional to funk, rock and ska. His influences include former mentor Baaba Maal, Bob Marley, Van Morrison, Paul Simon, Alpha Blondy and Aswad.

Recent gigs include a headline slot at Exhibition Roadshow (London) and appearances at Wickerman, Wizard and Knockengorroch Festivals. He has supported artists including Youssou N’Dour, Vieux Farka Toure and Amadou & Mariam.

Guest performances include singing with Orchestra Baobab at Glasgow Fruitmarket and with Baaba Maal’s band at the Celtic Connections Club.

Samba Sene & Diwan have been featured on BBC Radio Scotland, including MaryAnn Kennedy’s Global Gathering, The Festival Café and in a commissioned collaboration with Maeve Mackinnon on The Exiles project exploring the theme of exile/migrants in Gaelic and Wolof. Samba has also performed at the Scottish Parliament and for Prince Charles at Dancebase.

The band’s first full length studio album Remind Me (Fatalima) was released in 2011, to enthusiastic reviews.

Samba is Artistic Director and a founder of Afrifest Scotland, and a co-organiser of Ndaje: African Connections Club, an occasional event, which features a joyous, eclectic mix of live bands and DJs

What the press have said: