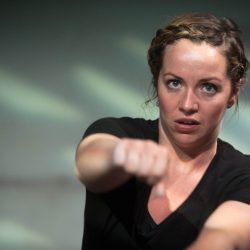 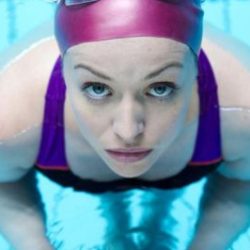 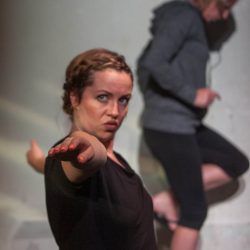 
A swimming pool in post-earthquake Christchurch, New Zealand. Recent Irish emigrant Maeve is learning to swim. Swimaholic coach Doreen eggs her on. Maeve must battle the water and an unresolved dilemma with her much-loved father back home.

The aftershocks of the Christchurch earthquake create physical and emotional tremors for the young Irish emigrant, whose present and past lives blur into an anxious mess. Learning to swim becomes the metaphor for her survival in this fine, understated play, through the subtle clarity of the writing and the wonderfully judged performances… Irish Times

Mixing serious themes with warm humour, Remember to Breathe is a deeply moving play about moving home and moving on. A multi-layered, father and daughter tale in which one woman’s search forces her to confront herself, her past, her fears and her future, in a swimming pool in New Zealand.

The talented cast is led by a breathtaking performance by Abbey Theatre regular Liz Fitzgibbon with Julie Sharkey and Irish Times Award nominee David Heap (who has been involved in many previous Edinburgh Fringe shows (including the 2014 Fringe First winner Lippy) and whose film work includes the John Schlesinger film Sweeney Todd and regular roles with film director Jim Sheridan).

Dublin based writer-director Orla Murphy is a talent to watch. Remember to Breathe, her playwriting debut, was nominated for Fishamble Best New Play in Tiger Dublin Fringe and a radio script version was shortlisted for the BBC International Playwriting Award. She was mentored by Jim Culleton of Olivier award winning Fishamble Theatre in a year-long Directing for Theatre mentorship. Orla holds an MA in Scriptwriting from IADT and teaches creative writing in NUI Maynooth.
LISTINGS
Aug 5-14, 16-27, 5.30pm (55 mins)
Summerhall (venue 26)
1 Summerhall, Edinburgh EH9 1PL
Tickets £12 (£8)
(5th Aug preview – £8, 2 for 1 on 8th, 9th Aug)