Schrieberg is a Colombian-American living in Scotland, with a background in American blues music. He is a veteran of the Edinburgh music scene, known for high energy performances with his band the Blueswater. He is the producer behind a number of successful Edinburgh Fringe music shows, including the award-winning BLUES!

Schrieberg explains the ethos behind his new band:
“I knew I wanted to sing in Spanish and create a blend of Afrobeat and Latin funk, and fortunately the guys were happy and excited to jump aboard. They are phenomenal musicians who have taken the project in exciting directions”

Poción de Fe debuted their unique sound at the 2014 Edinburgh Fringe Festival in the award-winning venue The Jazz Bar. They have also been recording and touring, including an appearance at the London International Arts Festival. A short tour in Mar/Apr 2015 sees them travelling almost the length of the UK from London to Inverness via Oxford, Leeds, Edinburgh, Glasgow and Aviemore. 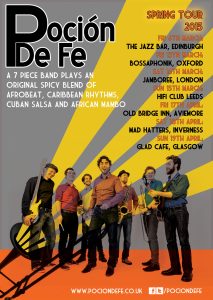 Poción de Fe release their first single on 6th March 2015 – Al Infierno b/w La Vibora – a taster from their forthcoming album. Al Infierno is an upbeat song which calls out all those who engage in various geopolitical and societal misdeeds. The chorus ‘Al infierno contigo’ means ‘To hell with you’. La Vibora is inspired by Dominican bachata music, using the basic rhythm while not quite following the usual instrumental conventions of the genre. It speaks of “the viper of austerity” that hides in the grass of society and eats the most vulnerable people, the vocal woven through a seductive sinuous groove.