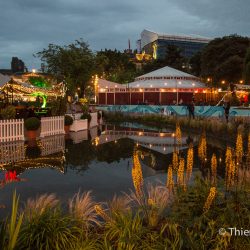 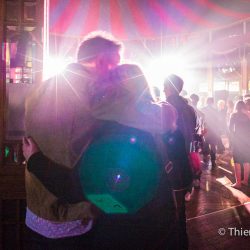 2016 sees the return to Edinburgh of the Grand Old Dame herself – The Famous Spiegeltent. After a few years sunning herself in southern climes, she returns in all her glory to the beautiful St Andrew Square Garden, Edinburgh, bringing with her everyone’s favourite Fringe icon – La Clique – Encore!

The Famous Spiegeltent, owned and run by Spiegeltmaestro David Bates, is one of the original Belgian mirror tents, which has hosted fabulous performers such as Marlene Dietrich since the 1920s. 2016 is her 21st Edinburgh birthday and she is celebrating with a wonderful programme of music, cabaret, family musicals, children’s shows, late night clubs and classic festival frivolity. 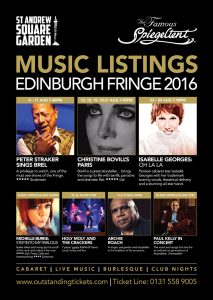 There is a terrific evening music lineup for Edinburgh Festival Fringe with a series of sublime concerts by Peter Straker (one of the great voices of the British stage singing the songs of Jacques Brel), award winning chanteuse Christine Bovill with a brand new show, Christine Bovill’s Paris) and Parisian cabaret star Isabelle Georges, all of whom are perfectly at home in the greatest of all Salons of Kabaret. We are also honoured to be presenting intimate live concerts by Australian indigenous singer songwriter Archie Roach and the incomparable Australian bard Paul Kelly. The former Cherish the Ladies lead vocalist Michelle Burke will be inviting you to Step into her (memorabilia-bedecked) Parlour and the 7 piece folkNroll band
Holy Moly and the Crackers promise 3 nights of loud, funky fun. 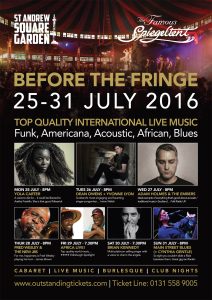 But we kick off with Before the Fringe (25 – 31 July), a fabulous week of amazing live music for a wide range of tastes as well as cabaret, burlesque and late night Club Spiegel shenanigans. Before the Fringe features a fantastic international lineup of one-night-only live music including legendary bandleader and trombonist Fred Wesley & the New JBs (an 8 piece jazz-funk powerhouse) and the multi-platinum selling Irish singer Brian Kennedy. Several performers are en route between headline shows at Summertyne Festival and Southern Fried Festival, including Yola Carter and Celtic Americana singer/songwriter Dean Owens (in a double bill with Yvonne Lyon). Completing an eclectic lineup is rising star Adam Holmes and the Embers, Samba Sene & Diwan with original Bhundu Boy Rise Kagona and his Jit Jive Band and energetic, electric blues from Main Street Blues.