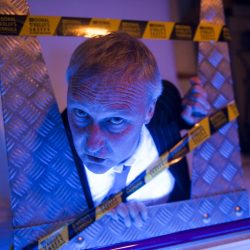 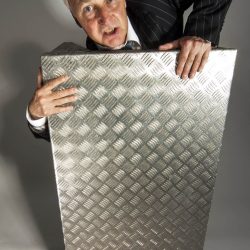 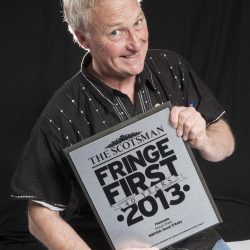 His 2013 production Fionnuala, about the Shell Corrib Gas pipeline in County Mayo, won a Scotsman Fringe First, was shortlisted for an Amnesty International Freedom of Expression Award, with Donal being nominated for a Best Actor Stage Award.

Francisco, produced for radio by Ocean FM, in collaboration with acclaimed Irish musicians Kila, won the prestigious Berlin Prix Europa in 2013, a unique achievement for a community radio production.

Other recent productions include

Other plays include The Dogs (Rough Magic), Hughie On The Wires, Trickledown Town, The Business Of Blood, Farawayan, (all Calypso) Asylum! Asylum! (Peacock, Traverse Edinburgh, Ottawa and Boston), Mamie Sighs, Judas Of The Gallarus (Peacock) and The Hand (Dublin Theatre Festival).

He has twice been awarded an Irish Arts Council literature bursary, and in 1999 was awarded the Irish American Cultural Institute Butler Literary Award. He set up Donal O’Kelly Productions in 2000, and has toured extensively at home and abroad since then.

As an actor, his film roles include leading roles in Roddy Doyle’s The Van and in the acclaimed bilingual film Kings, Brainer in Spin The Bottle and Funny Face in I Went Down.

He is also a committed human rights activist.