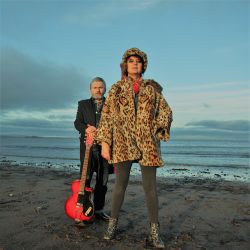 The Countess of Fife Live is released (on digital and as a limited edition physical CD) on Fri 9 May. There are 4 songs – the reflective Angel in My Pocket, the dark and grungey Humans Are a Bad Breed (co-written with Goodbye Mr Mackenzie/Filthy Tongues’ Martin Metcalfe), a defiant Don’t Dress Me Up and country death rocker Take Me To the Grave (With a Broken Heart).

The Countess of Fife began as a writing project in late 2016 by Fay and Allan Mcdowall of post punk country outfit So You Think You’re A Cowboy. A more permanent live band formed in 2019 and The Countess of Fife has grown into a live outfit with a dedicated following.

Along the way they have played several well received radio sessions and attracted fine press reviews. Shows include Bute Fest, Outsider Fest, Edinburgh Fringe & Cash Back in Fife festival. They recently headlined at Mac-Arts Galashiels and were due to play Muck & Mac Fest, July 2020, until Covid 19 put paid to live gigs for 2020.

A studio album is in the finishing stages (funded by Creative Scotland and Kickstarter) with release scheduled for 2022.