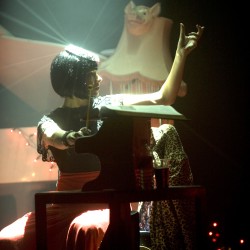 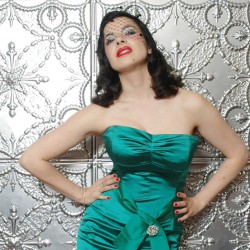 Camille O’Sullivan enjoys a formidable international reputation for her dramatic interpretations of the songs of Brel, Cave, Waits, Bowie and more.  Chameleon-like on stage, each song has a different character with its story to tell. The award-winning singer has stunned audiences around the world with 5-star sell-out performances, including Sydney Opera House, London’s Royal Festival Hall and show-stealing appearance on Later with Jools Holland (BBC TV).

Dark, fierce, amusing and mesmerizing, Camille transforms each song into an intense theatrical experience, drawing her audience into a world illuminated by the dark and the light. Expect fire, ice, darkness, joy and pure passion.

In 2012 she co-created and starred in the award winning Royal Shakespeare Company production of the Rape of Lucrece – a stunning solo performance with words and music composed and adapted with MD Feargal Murray and director Elizabeth Freestone. Rape of Lucrece premiered at the Edinburgh International Festival and has since toured to Dublin Theatre Festival, Brazil, Sydney Festival, RSC’s home base in Stratford upon Avon and Queen Elizabeth Hall, (Southbank Centre) London to increasing acclaim.

“Shakespeare, surely, could never have imagined such a stunning feminine repossession of a work so replete with male narratives. Thanks to O’Sullivan’s brilliance, we no longer have to.”
Fintan O’Toole, Irish Times